We had to find an exciting product to form the core of our business. Chicory meets all of these criteria! Fundamental to consumer products and traditional preparations for human consumption or animal feed, chicory never ceases to surprise us during the course of our work in searching for new varieties, new applications, and discovering new benefits.

Originating in the Mediterranean region, chicory has spread throughout the world. Not resisting well to the competition from other herbaceous species, chicory in its natural state is found on dry, stony, poor soils because its long taproot has the advantage of reaching deep water.

Although the use of chicory has been known since the times of Ancient Egypt, it is only since the 18th century that its cultivation has become widespread due to it being added to coffee for which supply in Europe has been regularly interrupted by international conflicts. Since the end of the Second World War, the use of chicory as a coffee substitute has, however, been considerably reduced.

However, since the 1980s chicory has expanded thanks to industrial use of the inulin, a reserve material from its root, as an ingredient in foodstuffs and as a source of sugars after depolymerisation (fructose syrup). The cultivated surface area is growing, and cultivation of industrial chicory is mainly concentrated in Belgium, essentially in Wallonia.

Many types of chicory: how can you choose the right one ?

Chicory is a plant of the family Asteraceae, of the sub-family Cichorioideae, of the tribe Lactuceae, and the genus Cichorium.

Industrial chicory (Cichorium intybus sativum) is also called inulin chicory, coffee chicory, or yet again drink chicory. It belongs to the species intybus and the cultivated form sativum. The cultivated forms foliosum and sylvestre have been selected for consumption of their buds (Witloof or chicon) and their leaves for human food (Italian red chicory, sugar loaf, …) or animal feed (forage chicory). Other species in the genus Cichorium are eaten in salads as escarole or frisée. They belong to the species endivia. 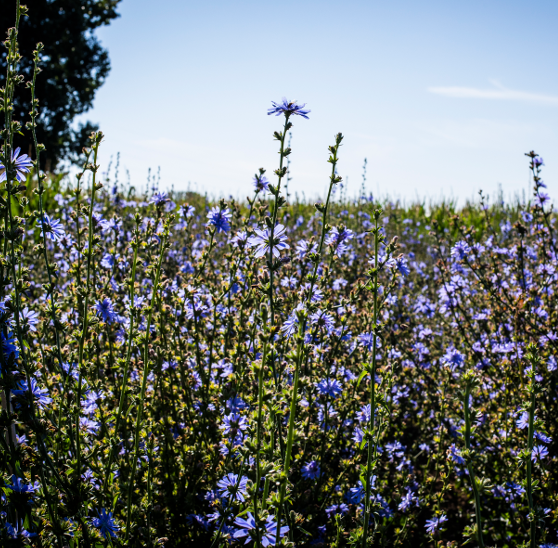 Industrial chicory is a cross-pollinated biannual plant needing vernalisation. Naturally, seeds germinating at the end of summer form a rosette of leaves maintained throughout the winter. The winter cold induces the plant to flower (vernalisation) so in spring this translates into the formation of a stalk (bolting) from which a large number of capitula emerge (grouping of ligulate flowers) which are generally blue.

The chicory flower is composed of a ligule (5 fused petals) at the base of which the 5 anthers of the stamens are grouped together in a sleeve from which the style and the 2 stigmas emerge.

The chicory flowers open synchronously for each capitulum after the sun rises and wilt rapidly after pollination. The plant is highly allogamous (almost no self-pollination) and entomophile pollination is guaranteed by bees, bumble bees, hoverflies, etc. leading to the formation of akenes.

After maturing for about 1 month, the mature akenes are immediately able to guarantee the generation that follows (dormancy in chicory is unheard of). The chicory akene is a dry indehiscent fruit whose walls are fused to the seed. It is small in size (2.5 – 3 mm), and its colour varies from light yellow to very dark brown. The very small content of reserve material (seed with no albumen) naturally confers little vitality on it.

The chicory root and inulin

The chicory root is the most important source of inulin, also called chicory root fibre. Chicory root is mainly composed of water, inulin, pulp, and insoluble sugars. It contains approximately 16% inulin. Although inulin from chicory root is a soluble foodstuff fibre present in more than 36,000 fruits and vegetables such as bananas, garlic, and wheat, the highest concentration is found in chicory. 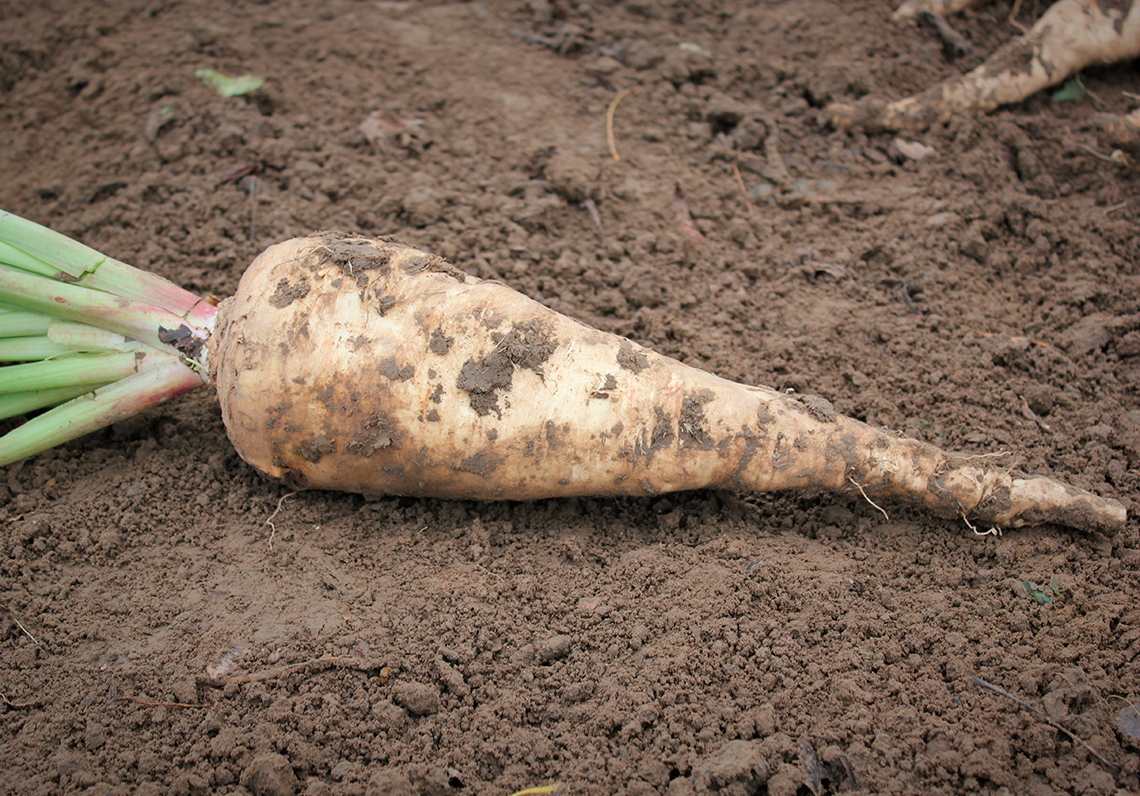 Inulin obtained from chicory is a mainly unbranched fructuose polymer, starting from a unit of glucose. The physical-chemical properties of inulin from chicory vary as a function of the length of the chains (the number of fructose units constituting the molecules of native inulin varies in chicory from 3 to 60).The plant synthesises and stores inulin chains as long as the environmental conditions remain favourable (synthesis phase). When the nights become colder at the end of the season, the plant activates depolymerisation of one part of its inulin (degradation phase) releasing free sugars (fructose, glucose, and sucrose), permitting the plant to resist the winter. The inulin is remobilised in the following spring to form the organs of the generation phase.

The benefits of inulin

Natural chicory root fibre can be used in the food processing industry and has various beneficial effects on the health and nutrition of both humans and animals :

What are you
looking for ?